So, Las Vegas is a madhouse. It's a sort of colossal desert monument to excess of any kind, be it gambling, drinking, smoking, sex, food or entertainment.

The casinos are full of people pumping money into the slots or the tables (and in turn having free drinks pumped into them by scantily clad service girls) 24-7. All the bars are open 24-7. On the street young men proffer cards offering "Hot girls in your room in 20 minutes for $40" (which brings to mind the old corporate adage that a project can be delivered a) on time b) on budget or c) to the required spec, but never all three together). It's bonkers.

We tried the buffet at our resort on our second night there, which involved a lot of queuing and average food. On the third night we hit the Strip, went to an excellent sushi/fusion food place and enjoyed a tasting menu which involved such delights as 'Kobe vs Wagyu beef head-to-head' and then went to see a magic show (Lance Burton, one of the creepy old-school top-hat-and-tails & bringing kids on the stage sort of magicians, not the homoerotic tight pants and leather new-school ones). Then we wandered around a bit more looking at the sights and sounds and drinking martinis.

I put $1 in a Star Wars slot machine on my way to get breakfast and took $73 out. That was pretty much the extent of our gambling. 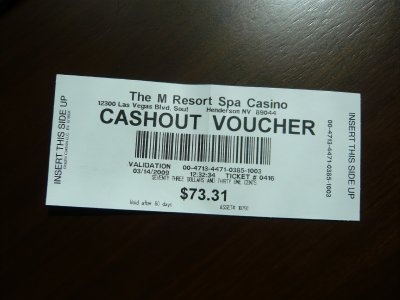 We tried to get married (again) but couldn't find a chapel that would do it for less than $200 (and that wasn't even an Elvis wedding) so it wasn't to be (Sorry Maz...) 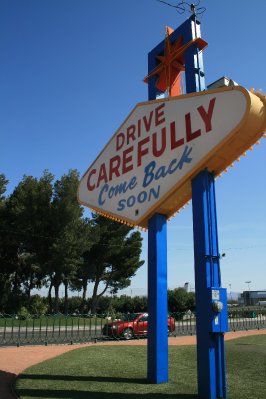 An early, fairly hungover start to the day driving out of SF downtown into Yountville in Napa County (these destination restaurants always seem to be in the arse end of beyond...). We have picked up a slightly more fun car for this leg of the trip (and paid a third over the internet what they told me at the counter; more on this car later though) so the driving itself has also been a pleasure. Lunchtime reservation at the restaurant which we barely made as relying on the GPS to get out of downtown was a slightly confusing and hair-raising experience.

Anyway, we got there. The town of Yountville is one of these picture-perfect towns that they have in the Napa Valley where everything looks like sunshine and happiness and you never see litter or tramps. The restaurant is in a very 'cute' little couple of buildings that was probably an old inn or something. It's a little bit formal than most of the fine dining places we've been to before - collars and jackets required for gentlemen. Once we get inside the ambience is a slightly muted, probably accentuated by the fact that it's split into several smaller rooms (and it's lunchtime and everyone is driving so nobody is half cut), but everything about the place is very... polished. It's a classic dining experience that has been perfected over time and which everyone that works there is very aware of and works towards. 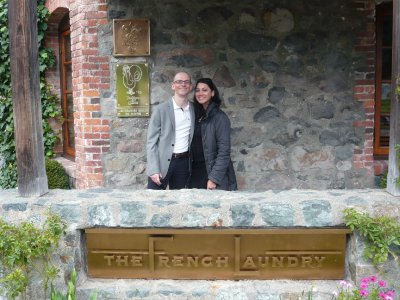 And of course the food is very very good. There isn't the wild creativity of some of the places we have been to recently displayed, but that's not the point of this place - it is a classic experience and that's what you come here for. I think the closest analogue that I've been to is somewhere like Petrus in London. The courses follow that sort of classic procession - amuse bouche, foie gras, fish, lobster, meat, cheese, desserts, petits fours. And some of the courses are absolute triumphs - the starter of cauliflower panacotta and caviar was fantastic; the veal was phenomenal; and both the meat and both the dessert courses were exceptional. And the bread and butter was really astonishingly good! I lost count of the different types of bread, but we were offered two types of butter (either of which i could have eaten a pint of) and three different types of salt to go with a brioche course, one of which we were reliably informed was from a copper mine in Montana and was 42 million years old. No shit! However we did feel that some of the courses had flavour combinations which didn't gel entirely perfectly. This having been said, nothing is ever perfect all the way through and we are very picky people... it was still an amazing meal. Doesn't top El Bulli for me though I have to say.

More pictures than you could look at during the course of a four-hour meal in the gallery. Here's the bread and butter, yum! 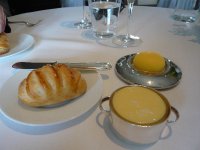 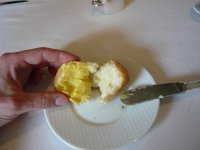