As we move through our travelling experience, we´re finding our plans changing more and more. Some of this is due to us deciding we want to change our focus on (first food, now diving). And some of it is due to random things which pop up in our path which we didn´t expect to find.

An example of the latter would be the Roatán Institute of Deep-Sea Exploration. Owner-operator Karl Stanley has been fascinated by the thought of underwater travel and submarines since he was 9. Since then he has dedicated his life to building and running subs - now basing himself in Roatan as there is a very deep trench very close to the shore. He´s built several subs over the years - his latest, Idabel, has been taken down to a depth of 2540ft. This is the world record for a non-military sub. We saw his operation across the bay on our first day in Roatan but originally dismissed it as "craziness". And forgot about it for a while. But then a week later we got talking to Steve, one of our friends on the island, and... it sounded amazing. We pondered it for a short while, and then decided to go for it.

Recap: we had agreed to get in a small (2-3 people plus captain) submarine, which one man had designed and had built himself, and for this man to pilot us down to a depth of roughly 2000ft below sea level, over the course of 4 hours. Hopefully to see lots of weird and wonderful beasties which are never seen at lesser depths. We asked Karl if there was any insurance- "Well, I´m driving it. No problems so far". What could we say!

We arrived for our trip just as dusk was starting to become a reality. Necessary gear for a submarine ride: cameras, water (not too much...), snacks, warm clothes (ït gets down to 10 deg C at the bottom). Nervously, we kiss, possibly for the last time, on dry land, then get in the sub. We are in a large spherical observation blister at the front while Karl stands behind us piloting (he has windows all around but we still end up with a better view due to the distortion effects the spherical glass gives). The waters roll up the window as we watch and then close above our heads. Hmm. Slightly nervous now. We head out to see and then start to slowly, slowly, sink. It has to happen slowly because the sub has been built to be as close to negatively buoyant as possible, i.e. that it NOT sink like a stone, in case anything were to happen then it is easier to get back to the surface with only a small amount of buoyancy air being used. Not that anything would happen. Would it?

It starts to get dark around 300ft down. This is more than twice as deep as we´ve ever been with a tank on our back. Weird creatures start to appear - jellyfish, upside-down-fish (which just hang in the water like a popsicle), and then, looming out of the darkness, something which looks like a pink ectoplasmic tentacle. It wraps itself around one of the struts that hold the lights, before boring through the hull, sucking our brains out through our noses and turning us all into zombies. No, not really. It falls off eventually as we descend deeper.

Deeper, deeper. We descend through 1000ft. This is deeper than any diver has ever been (world record is 308m I believe), regardless of any equipment. It´s black as pitch and we are still seeing weird partially-alive things. Eventually (after more than an hour) we get down to 2000ft. We are close to the sheer wall, which plunges away above and below us into even deeper, unplumbed depths. The landscape looks like the Moon or Mars - rocky, silent, barren. We start to make our way along the wall. "What´s that?" I ask, pointing up and two the left. Karl flicks the light over and we are gobsmacked to see a 3m-long sixgill shark calmly pacing us. He´s a big boy, and almost touching the glass. These sharks are never seen above 1500ft. Creatures of the deep...

We spend maybe an hour at or around 2000ft. Over the course of this hour we see a lot of freaks and oddities. Albino lobsters. Coloured sponges. Brightly coloured angler fish with their lures out. Tinsel fish trying to scare us off. Tripod fish - walking along the seabed on their fins! We see some orange roughy (a very tasty fish which it was unfortunately only discovered after we had eaten 95% of them that they live to be 100 years old and only reproduce once in a blue moon - DON´T EAT THEM!). And we spend 10 minutes sat on the sandy bottom watching a dumbo octopus. Bit difficult to describe other thab as the cutest cephalopod you will ever see - they really look like Dumbo the Elephant.

At the bottom we are layered up in jeans and hoodies, with icy condensation dripping off the metallic frame onto us. We are, for all intents and purposes, astronauts, without leaving the planet. Only a thin shell of metal stops us from being instantly pureéd. It´s amazing being down there and seeing the sights but I can´t say this thought is ever far from our minds. We come up from the depths slowly over the course of two hours, and then it´s over. Water splashes across the top of the window (or, more pertinently, air does!). We pull back into dock in the balmy Roatán night, get out, and have to pinch ourselves. Did that really just happen?

Roatán is a funny place. When we sit down and pick it apart it's easy to dismiss. The place is brutally hot in the middle of the day, compounded by the almost total lack of any breeze and the fact that there's a good few hours of power (and water) cuts every few days. The lack of breeze also means that it's crawling with mosquitos and sandflies; but as it's a protected marine park you're not supposed to use DEET. The cash machines run out of money every other day, and credit cards are useless. On top of all this the food (in restaurants and supermarkets) is almost London prices, due to the direct flights from the USA and the high prevalence of cruise ships visiting the island. But sitting here in our hammock on our veranda, listening to the gentle rain through the trees, sipping rum and watching geckos doing their bit to keep down the bug population I feel a bit kinder towards it. We've been here well over a week but are finding it very difficult to recall exactly how long it is; or come to it, to make any firm plans to leave to go to Ecuador. And we didn't even intend to come to this country (Honduras) originally! 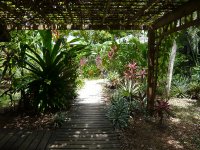 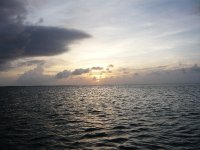 We are staying in West End, which (to be fair) is the most heavily touristed place on the island. It's swarming with dive shops of every stripe, and at times it seems that pretty much everyone who isn't over 40 and here on a package holiday is here to do their DiveMaster training. Several of the shops have people running all the courses together, from Open Water (i.e. never dived before) to DM (i.e. you're leading people to dive). All in 2 months. Needless to say this seems a little bit of an accelerated schedule to us, to say the least.

We spent our first four days here doing a Rescue Diver course, which is a basically what is sounds like, sort of like lifeguard training but with what to do if people get in trouble underwater. Very good training as our instructor delighted in making it as realistic as possible and as stressful as possible also. We are very very glad we did it but very very VERY glad it's over! We've done a couple of fun dives (i.e. not doing any courses or anything 'serious') over the last couple of days and have been pleasantly surprised with the state of the corals and the fish populations – the first drift dive I did every fish I saw was an absolute monster. 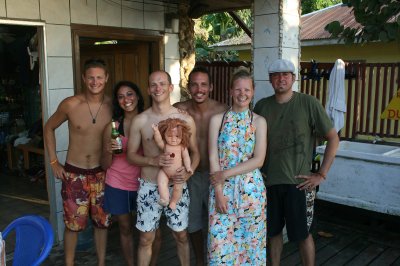 UPDATE: we spent today lazing around the pool at one of the 'exclusive' resorts as an unexpected bonus of bumping into Steve who we met in Belize, who had blagged some entry wristbands off one of the owners in a bar. Result! A nice change to be spending time in an infinity pool rather than a communal bathroom. We've also booked our flights out to Ecuador, leaving a couple of days early. Annoyingly the FCO advice regarding Mexico has just changed to allow UK nationals to go there... oh well, another time. 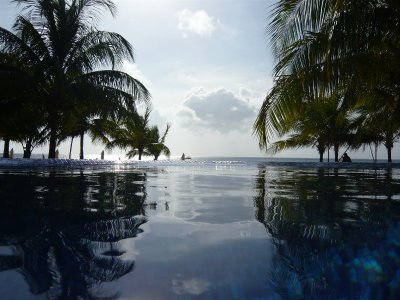 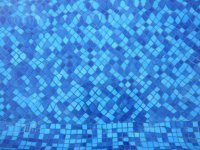 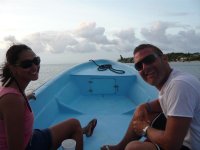