Paradise... at a price

We left the crazy, strange, mildly inbred world of Rapa Nui late on wednesday night, after enjoying a final day of lazy sightseeing and a very nice dinner at a little modern bistro place.

I won a game of rummy with a straight flush! 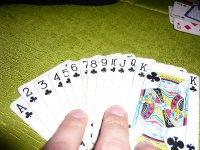 After that we flew to Papeete airport, in Tahiti. Immediately we were met with a bit more of the Polynesian welcome we expected - grass skirts, a flower in the hair for everyone, and ukelele strummers at the airport. Hurrah! We crashed out for the night and then got the ferry to Moorea in the morning.

Moorea is very close to Tahiti, part of the Society archipelago (French Polynesia is made up of 5 different island chains - Society, Austral, Marquesa, Tuamoto, Gambier). Tahiti is the only island with an international airport and hence the Society islands are by far the most heavily touristed. And the price of this tourism is pretty high. We were prepared for the high cost of lodging but were a little stunned by how expensive all the incidentals were - an hour of internet cost $9, and a simple burger lunch for two would run to about $40. However I was determined that we would have waterfront lodging!

So we ended up staying at the Club Bali Hai, a faded and slightly rough-around-the-edges place. We were entertained nightly by Muk, the faded and slightly rough-around-the-edges former owner, who regales all the guests every night with tales of coming to Moorea in the 1960s, spending every night drinking rum and carousing the local lovelies. One of the three of the guys that came over has sired 10 children by 5 different women! Full amusing story here http://www.ocregister.com/ocregister/travel/world/article_1289983.php

Anyway, we had our waterfront villa, and very nice it was too, setting us up for a week of lazing around in the sun and diving. The diving was pretty exciting - all the coral had been killed by the crown-of-thorns starfish but the reef fish were all staggeringly pretty (every one colourful, or masked, or striped, or something exciting) and the place was crawling with sharks! One day we saw 5 different types of shark before breakfast, and we had 3 metre pregnant lemon sharks coming to within a metre of us while the DM brought a tuna head down for them. Slightly worrying actually.

And that was French Polynesia really. We would have liked to fly out to some of the outer islands where the culture (and the diving) are a lot more distinctive and exciting but we didn't have the time or the money. Next time - when we have the yacht...