Back to Yangon again, and then the next morning we started to head south. Most of the southern strip of Myanmar dissolves into a beautiful archipelago of blue waters, white sand and stunning coral that is unfortunately almost completely off limits to foreigners. We only make it less than 200km out of Yangon but that's pushing up against the outer limits of as far as we can go.

Our first stop is Kyaitiko, also known (for reasons that will become painfully clear) as Golden Rock. This is one of the holiest sites in Myanmar; correspondingly getting there does feel like a bit of a pilgrimage at times. First step is the early bus out of Yangon, taking us a few hours south to Kinpun town, a bit of a nothing place. Next step is to get in the back of a huge pickup lorry, luxuriously fitted out with arse-chewing wooden slats with about 13 inches of leg room inbetween them. Just for fun, look down and estimate how long the span from the back of your bum to the front of your knee is. More than 13 inches? Yes, us too. We have to concertina into this torture contraption while willowy Burmese are shovelled in around us, bending in some arcane way that means they actually seem quite comfortable as our blood pools in novel and painful places. The truck was then held on until 48 people were in the back: 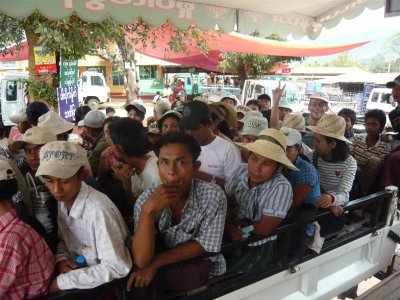 Once we were loaded beyond the point of suspension of disbelief, it was a bone-crunching 45 minute ride, up steep gradients and down scary troughs like a rollercoaster, to the top. The ride was further improved as the two girls in front of us vomited continuously into small plastic bags which they lobbed over the side, and finally as the old lady next to me started to eat the stinkiest durian fruit sweets ever (more on the King of Fruits, the durian another time).

At the top we hobbled off and started walking. It was another 45 minutes up steep paths before we got to the top. Luckily, most of the way is lined with stalls selling refreshing coconut juice & sugar cane, as well as huge bamboo swords and machineguns, stinky dried stuff and oil that had been infused with the essence of animal skulls and huge millipedes (really). Once there we had the privilege of staying in the single most overpriced hotel room in the country at the Mountain Top Hotel (the hotel can basically charge what it wants as it's the only hotel at the top; if you don't stay there then you don't get to see the Rock at sunset or sunrise.

Summary: once we got to the top we were tired, sore and poor. Then we saw the Golden Rock and it all went away in a heartbeat.

Kyaitiko is one of those sights that you really couldn't get anywhere else, and once you see them you wonder why everyone isn't there. Take one huge rock, perilously balanced atop another (to the extent that you can see daylight underneath it). Plant one medium-sized pagoda on top of said rock. Cover the whole thing in gold. Sounds very simple but the whole thing is stunningly beautiful, and takes on a really intense atmosphere at dusk as the pilgrims pour in and start doing their chant-offs. 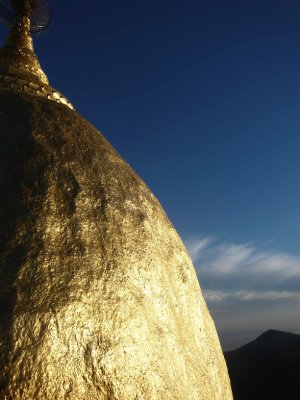 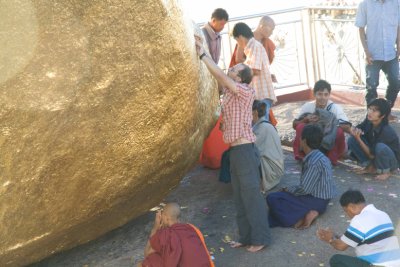 One of the best things about Buddhist holy sites is that Buddhists are always (in our experience) some of the most laid-back people you could encounter and are always happy for you to poke around their sites & participate in their rituals. Hence, I got to put on a few more layers of gold leaf! It's only men on the platform as women aren't allowed there - so I also got to put on some leaves for a female Japanese tourist who accosted me. Our path to nirvana is assured. Well, maybe not, but we should have avoided some of the nastier lower reincarnations, like a lichen or a worm in a dog's stomach.

Posted by pendleton 20:13 Archived in Myanmar