From Yangon we fly north to Bagan. Bagan is a dry central plainsland which had a spectacular fit of temple-building once the then-king converted to Buddhism, building of the order of 4000 temples in a couple of hundred years. Many of the temples stand derelict now (apparently because the religious leaders have decided that renovating a temple accrues no religious merit, however building a new one does. Not very reduce, reuse, recycle...) but this only adds to the atmosphere.

We are staying in a small, very low-key backpacker town called Nyaung U which is probably one of the quietest places we have yet been to. There are about as many horse-drawn carts as there are motorcycles, and significantly more bicycles than either. The entire town feels moribund by about 8:30 at night. The main draw is to spend one's days bicycling (or, for the slightly ill and slightly lazy like us, horse-drawn-carting) around the central plain, poking around different temples, trying to remember which one you were just poking at and playing spot-the-difference.

For a quick change from pagodas (it's very possible to get over-pagoda'd in this country) we took a day trip out to Mount Popa, home of the nats. Burmese nats are very unique to the country; they are sort of like a cross between a patron saint and a malevolent spirit which must be placated. Some of them are the stuff of legend; some are recent historical figures; most of them seem to have come to unhappy ends (especially Drunkard Nat). While poking around the part of the nat shrine which was semi-closed for renovations we noticed a figure who looked very much the Hindu god Ganapati. Who's that, we ask our guide? Ah, Hindu nat, he replies. Fair enough.

From Bagan we fly west to Sittwe, a pretty unremarkable town close to the Bangladesh border, and then took a 5 hour cruise up the river to Mrauk U (pronounced "miaow OOo" by the locals). Now we are officially miles from anywhere. Some intensive beermat calculus reveals that we think there are approximately 40 tourists in the town at the moment. On an average day we will spot approximately 8 other foreign faces: 6 of those being from our guesthouse. Here one follows a similar program to Bagan: get up, bike around, find temples from Lonely Planet guidebook, find other random temples, climb up hills, chat to monks, go down random paths, find more temples. But the place has a really special atmosphere - much more magical than Bagan. It could be because the town is still 'properly' inhabited. It could be because there are more hills, and moisture, and hence more trees here. Not sure. Regardless, this is small-town Burma at it's best, and we have an unreasonable amount of fun peddling around under the scorching sun, with schoolchildren screaming "Hello! Bye-bye!" everywhere we go, finding interesting temples and Buddha images, and then retiring to our attached beer garden for daily post-mortems with our Canadian and Swiss co-conspirators. And hot and sour pork with rice.

We also took a boat trip up the river to visit a couple of Chin villages and met some friendly old ladies with tattooed faces, and the cutest village girls in the world...

And some cheroot-smoking monks, of course. 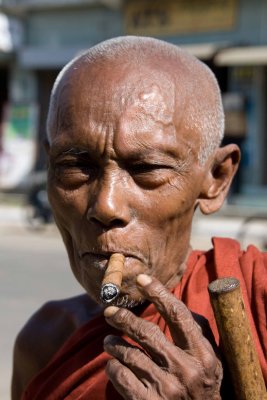 Posted by pendleton 02:27 Archived in Myanmar