We are standing in a small, dingy tunnel-like passage. All around us are cells with sliding cage doors, from inside of which come some appalling smells, grunts and whistles. The floor is awash with murky liquids. In front of us a Chinese man is shooting a rapid string of Mandarin at us and gesturing with a broom and mop.

Don't worry, we haven't been banged up for being overly smug marrieds - it's mucking out time at the Chengdu Giant Panda Research Centre! We have 'volunteered' (in the sense of paying a large amount of money) to help out at the panda centre for a couple of days. This involves a fair degree of menial task work, but more importantly, a lot of chances to be around pandas! Things we've done so far include:

You'll notice that most items on this list are actually fairly mundane tasks with 'panda' inserted in them somewhere. This actually transforms them from mundane to UNBELIEVABLY exciting! The pandas themselves are bloody hilarious (especially the younger ones) & totally compelling to watch; they are greedy, lazy clowns who are always pushing each other around, climbing over each other in search of food, making nonstop pratfalls out of trees, etc. We also got to massage one of the giant pandas, and I held a red panda! (sort of like a big ginger cat crossed with a raccoon, but much cuter). But most of the time we just spent watching the pandas clown around.

Excellent fun and well worth it. Dozens of panda photos await the intrepid viewer in our gallery, i'll just show a couple here. 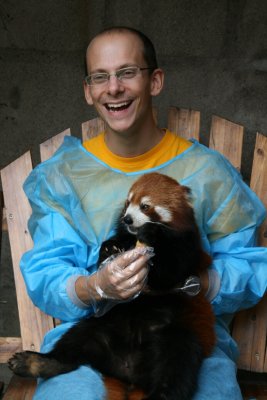 Posted by pendleton 08:58 Archived in China