OK, OK, so we were wrong. Very wrong. About as wrong as we've been on this trip, really.

Our working theory (developed from a bar stool in Hong Kong) was that HK would be a good primer for Beijing and hence China. Similar language, culture, food, etc, right?

Hong Kong is pocket sized – the metro will take you from end to end in about 40 minutes. Beijing is huge, vast, colossal, imposing. The map you are handed as a tourist is on such a small scale it verges on useless; a bit like being given a map of London & the Home Counties on arrival in Heathrow. You can (trust me on this) walk for hours just between two tiny looking consecutive feeder roads.

Hong Kong is actually quite comfortable and familiar – the expat influence is very strong, and obviously it was a colony for 150 years or so. China is different. It's loudly, overpoweringly alien. Whereas in HK street signs were generally in Cantonese and English together, here in Beijing everything is just written in Mandarin script, with, maybe for one building in a hundred, the Pinyin anglicised translation. Nobody, and I mean nobody that you come across in the street speaks English – or even understands Pinyin! It's very starkly A Different Place and quite scary at first. The one blessing is that the subway is as superb as Hong Kong's, and likewise has English-language maps.

We lucked out in that we had booked an incredibly helpful guesthouse (Templeside Garden Hostel), in the old barrios to the west of town centre, who were happy to do or help us do almost anything – from arranging tours of the big sights to writing down “Please can I have half an order of Peking duck” on a Post-It in the correct way so that we could walk around until we found a restaurant we liked the look of and then brandish it at them. (For reference if you ever need to draw every staff member in a Chinese restaurant to a single place, have them start a huge discussion and then piss themselves laughing at you, this is one of the most efficient ways we have found. It works even better if you order a tiny little medicine bottle of the local firewater and start knocking out toasts to each other and everyone else present, but I digress)

In the end we gave ourselves five nights here before booking our flights out to Chengdu – we could have stayed longer but it could easily have turned into a month just here and we wanted to move on. We managed to tick most of the major tourist boxes (the spectacular Great Wall, Forbidden City, Tian'anmen Square, a surprisingly disappointing kung fu show) and even managed, on a breakneck last-minute taxi tour, to see the beautiful stadia that they erected in honour of our marriage last August. Well, it would have been rude not to pay them a visit. 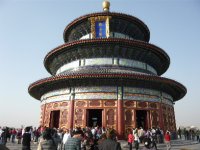 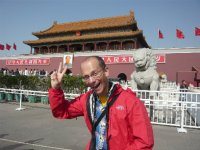 And we got stuck into the food, of course! Highlights here included a proper Mongolian barbeque (thin cuts of raw meat flash-cooked in a tasty bubbling broth by our own hand); making dumplings with our hotel staff; a bagful of soft, just-cooked stuffed buns that we devoured like migrants on the side of a busy highway, but which cost us only 2 yuan (20 pence) for eight buns (more than enough for a snack lunch for two people); and an enjoyable evening spent perusing the locals chow at the Wangfujing Snack Street market. We had very tasty couple of plates of fried beef and spicy noodles, and then I truly got my weird food mojo on, devouring (in short order) a fried scorpion, fried wormy bug thing and then a fried starfish. The scorpion was quite tasty but the other things got progressively worse, until the starfish which was like eating asphalt. We followed it up with a stick of toffeed baked crabapples, tart and fizzy in your mouth like sherbet. 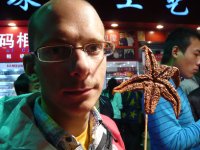 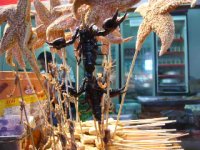 Disappointingly, i'm still unable to post the video(s) of me eating the scorpion and the other, well, garbage. You'll have to take my word for how funny Angi's screaming is.

p.s. we didn't manage to see the Peking Man. Sorry for the crap joke.

Posted by pendleton 04:35 Archived in China