At home it's a simple choice for a lot of people. What shall we eat tonight? Chinese or Indian? Upon (not a lot of) reflection, these are both vast regions, each with populations twenty times that of the UK. Not very surprisingly, the range of cuisines in each is correspondingly vast, vaster even than the most cultured stay-at-home foodie in the UK might suspect (putting myself squarely in this category until very recently!).

Hong Kong is an international hub, and it's very easy to get food from almost anywhere here (we've even seen Jordanian restaurants, a first for us), but it's the Chinese food that calls to the adventurous. We gave it our best but have barely scratched the surface in the eight days available to us. We started off with Chui Chow Canton-style dinner; lots of marinated barbecued meats, jellied goose blood and fried fish. Tasty, especially with the vinegared soy sauce it came with. (n.b. Canton is the generic name for the corner of southeast China that includes Shenzhen, Guangzhou, HK and Macau; Cantonese food is what we normally think of as Chinese food internationally as the Cantonese have long been the seafarers and implicit food ambassadors for the Chinese people as a whole. Things are changing though, and you can find some of these regional cuisines in places like London).

The next night we carried on with the most unbelievably spicy Sichuan-style rice noodle hotpot that had us literally crying tears of pain in the restaurant. It was like eating the sun! It's a different kind of heat to the chilli heat we are used to as the Sichuanese use a kind of spice called the Sichuan pepper in a lot of their cooking which has a slightly similar mouth-burny sensation to it but also comes with a whole lot of numbing-mouthy-sort-of-burny feelings too. Very yummy and very addictive. No pictures unfortunately as we were too busy trying to think of our happy place(s).

In Macau we had a quick Macanese lunch (sticky saucy rice cake and more marinated meats) and a fantastic Portugese dinner – starting with a jug of iced sangria! - of salt cod stew and “pork chunks with clams marinated in white wine sauce”, which was frankly good enough to go to Macau for. Here's Angi with Carlos, the jovial owner. The restaurant is called... Carlos.

Eating here does have its challenges. The, er, robust Chinese approach to animal 'welfare' means that fish are kept mouthing the air in polystyrene containers until you deign to pronounce their death sentence. Shark fins are huge business here – openly sold in bright, boutique-style shops for vast amounts of money, along with bird's nests and other such delicacies (n.b. Shark's fins are a terribly bad thing to traffic as part of traditional medicine as the fishermen catch the shark, hack the fins off then chuck the still-alive body back in the sea, not even using the meat). You'll also see these things all over menus, along with turtle, dried seahorse, mantis shrimp, and many more of our undersea friends. A bit of a challenge to ignore, but par for the course here unfortunately.

Lastly, we met up with Audre and Dimitri, our newest heroes. These guys have been travelling the world non-stop for fourteen years! Actually, if you ask them how long it's been you never get a straight answer so it could be even longer 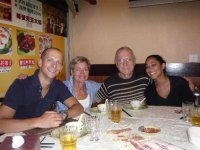 We stumbled across their fantastic blog (the link is on the right) while looking for something good to eat in Lima, and were amazed. On exchange of a few emails it transpired that we were all going to be in Hong Kong at the same time, so we agreed to meet up! It was a hoot meeting up with people as food- and travel-obsessed as we are, although we were obviously trounced on the war stories front. Maybe when we next meet again, four years from now in some other distant land...

Obviously we had to get some food. We went to Chilli Crab Under the Bridge, hoping they would have the (very seasonal and hard-to-get) Shanghai hairy crab available but it wasn't to be. Instead we opted for a sort of crispy salty duck egg battered crab (different to most crab preparations but yummy enough to scrape the crispy bits off the plate when we were finised), a hollowed pumpkin filled with a thick, pumpkiny seafood soup (we also ate the pumpkin afterwards), and a few other sundries, washed down with tea and beer.

We'll try to post a snap when we are out of China!

In the meantime, if any Travellerspoint community members can rendez-vous with Angi and Jon along their way, try to do so, you'll have a terrific time!