We went for Tea at the Peninsula today.

One of the classic hotels of colonial Hong Kong, the Peninsula maintains its air of more rarefied times with its army of impeccably uniformed flunkies, fleet of racing green Rollers parked out front, and of course, a flawless afternoon tea experience.

At first we were politely turned away due to Angi's flip-flop wearing casualness. Luckily we had come armed with a second pair of shoes. Nice to know someone is trying to keep the riffraff out though, eh? We were soon ensconced with a delightful cup of tea, a small selection of sandwiches (with the crusts cut off) and enough sugary treats to make the Tooth Fairy rub her hands in glee.

An hour later, we staggered out from the coolly air-conditioned calmness into the muggy afternoon air. Back to the real world again. Wouldn't have it any other way!

All of this was, of course, in aid of celebrating Sharad's 70th birthday. Happy Birthday Dad! 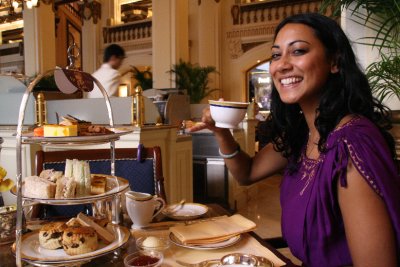 After our tea for two we went for an evening at the races. No joy though, so we'll have to keep the day jobs (travellers). 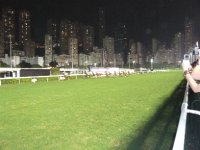