We spent about 2 weeks in Bolivia, which I´m going to have to compress a little because we´re so behind on this blog and i´m determined it not feel like hard work. Finding a reliable computer & internet combination in Bolivia is something of a challenge.

From Titicaca we got the bus to La Paz. No, not Gareth, silly, that would be El Paz! La Paz is the highest capital in the world - and if the 3660m+ altitude doesn´t have you gasping for breath the fact that it all appears to be built out of 45 degree angled sections of pavement will. We spent a night here, excited at the fact that we found the Star of India, a so-called "British Indian Curry House". Fantastic, we thought! It´s felt like forever and a day since we had a curry. Unfortunately the manager was a div, the poppadums were minute and fishy and the madras was average, strangely potato-ey and gave me the trots something rotten for a week.

However, before I was aware of my impending stomach-related trouble we were on a plane to Rurrenebaque in the north of the country, which is the gateway to the Bolivian Amazon. This was one of the occasions where the journey was an experience in and of itself, as we flew with TAM (Transporte Aero Militario), which is essentially a Bolivian low-cost airline flying on decommissioned military planes from working military bases. Entertaining watching the squaddies march around carrying chairs and luggage for the plane but we weren´t really sure if we could take pictures of them without being shot for sedition or something! Also quite refreshing to have no pre-flight briefing, no security, no X-rays... less so being locked in a small room for 45 minutes pre-embarkation.

Anyway, we got there in the end, and signed up for a 3-day tour of the pampas. This turned into a bit of a Heart of Darkness experience for me due to aforementioned issues, which I shall now gloss over. The tour itself was OK, unfortunately it rained stairrods for most of the second day, but we got to see alligators, capybaras and pink river dolphins, and fish for pirañas! Angi caught a huge red piraña which we then ate for dinner. That´s the food chain in action for you. Just before asking us if we wanted to have a swim our guide informed us that they can strip a human body of flesh in 5 minutes flat. Nice... 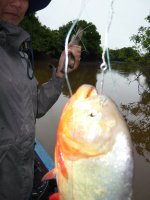 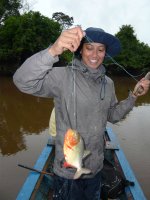 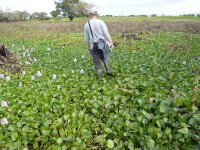 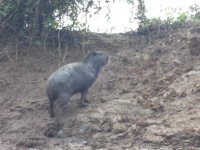 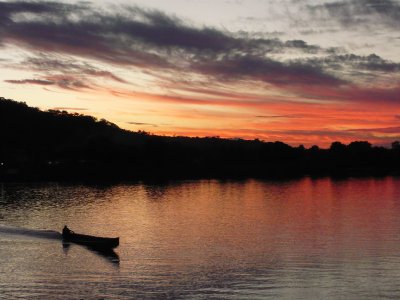 Coming back the rain had meant that TAM had cancelled all their flights for the next 4 days. This was because the heavy military airplanes couldn´t land on the soft grass runway! So we ended up having to pay and extra $100 to fly the 300 km to La Paz in a minuscule 6-seater Cessna. We were absolutely terrified at first, as the plane was significantly smaller than a lot of cars we´d been travelling in, but it ended up being a fantastic ride once we realised we weren´t about to die. 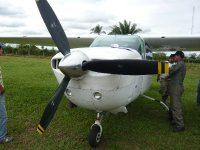 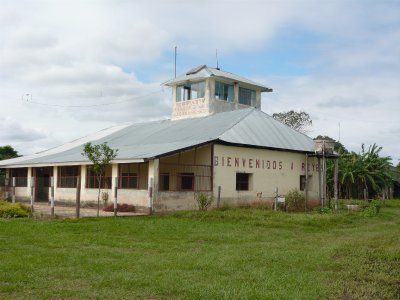 Back in La Paz we decided to try and end our recent spate of bad luck by buying some good luck charms and having our fortune told by a magic man. Apparently, Angi is bad and I have an enemy (allegedly not Angi, someone from my work - I think I know who...). We will have lots of money but only one son. A couple days later we had our fortunes read by a pair of trained yellow and white budgerigars, who told us that I was a single young man and that Angi was a little girl who should play the lottery on terminals 3, 2 or 6. Not sure which one I prefer really. 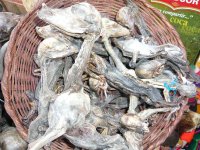 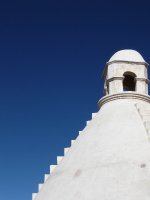 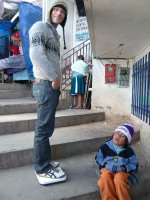 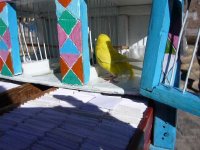 From La Paz we headed south to Potosi, a dusty little colonial mining town with the distinction of being the highest city in the world. The main draw here is to do a tour of the working silver/zinc/lead mines. This was quite an eye-opener for me as I used to trade these commodities from a desk in London. We started the day getting togged up in waterproofs, wellies, hard hats and headlamps, had a brief tour round the processing plant (which was very basic and full of pools of noxious chemicals used to separate the ore from the scrap, sulphates, mercury and cyanide anyone?). From here we went into the mine itself. The tunnels started out high enough to walk through but before long we were sliding around on our bellies. The interchange between "floors" in the mine involved a scramble up/down a 45 degree rock face, with no guide ropes, no steps, no toeholds, walls and ceiling covered in asbestos, while wearing wellies which were at a minimum 2 sizes too big. The lower floors got hot too - 30 degrees plus, with no ventiliation and tasting the clouds of particles in the air. We talked to a couple of miners that we came across, mostly sitting in the dark on their own chewing coca leaves to keep them going. The most shocking was a 13-year old boy, working alone as his dad was too hungover, just at the start of working a 23-hour double shift, with almost no breaks and no food during that time. All this for a random but generally small amount of recoverable ore per day, not always enough to keep them above the poverty line. Sobering stuff - must remember not to complain about working conditions in the office. We were very glad to see the blue sky again after 3 hours entombed. Then at the end of the trip we goofed around with some live dynamite which was exciting, to say the least! 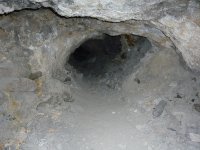 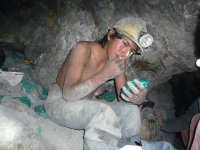 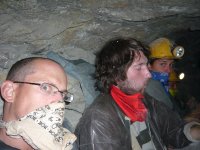 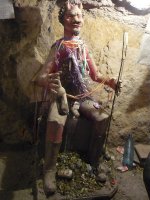 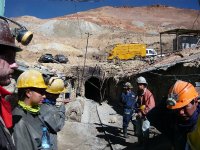 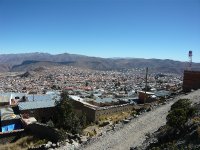 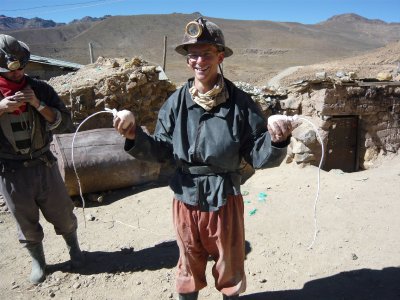 -this is me holding two live, lit dynamite bombs which exploded 90 seconds after this picture was taken. No shit!

From Potosi we caught an overnight chicken bus to Uyuni, another 1-horse desert town. The attraction here being the proximity to the biggest salt flats in the world - the size of Northern Ireland! We loaded up into a 4x4 the next day and were off. The flats are amazing - perspective crushes distance, and it seems like the only things in the world are the blue sky and white ground. Also some pictures here (er... at some point) from the Isla Pescados, a rocky outcrop of fossilized corals covered in ancient cacti. The rest of the tour was a little bit of an anticlimax, being a whizz around some coloured lagoons and high geysers (new Pendleton record - 5020m above sea level). The most notable thing about the latter days were the extreme bitter cold - down to minus 20 degrees C at the worst point. The last morning we got up at 4.30am and I was wearing 2 t-shirts, 2 longsleeves (1 thermal), 1 alpaca jumper, 1 hoodie, 1 waterproof, 1 pair leggings, 2 pairs socks, 1 pair jeans, 1 pair trekking trousers and a hat. Angi, as you can imagine, was wearing about double that and looked like the Michelin lady, but not smiling as much. 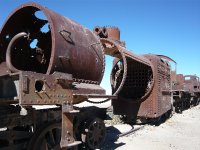 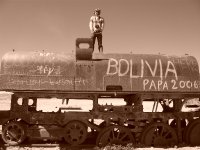 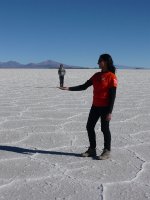 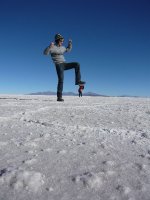 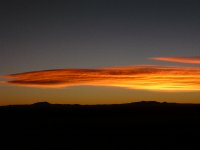 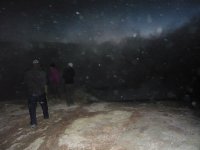 We were left at the border and caught a collectivo bus to San Pedro de Atacama in Chile, our third country in a fortnight.

Posted by pendleton 12:14 Archived in Bolivia