We are going up in the world.

Not socially, of course - quite the opposite really, we are slowly becoming soap-shy llama-wearing coca-chewing travelling bums. But in terms of metres above sea level we are headed higher and higher.

First stop off was at Arequipa, a fairly pretty colonial city which we just didn´t really take to. Possibly because lots of stuff went wrong for us here, but we didn´t gel. We used the city as a base for a 3-day trek down (and up again) Colca Canyon, one of the deepest canyons in the world! The canyon is around 2100m deep and we traversed about 1300m of that I believe, with the river at the bottom being around 2000m above sea level. The trek was pretty tough but we managed it and were very satisfied. We saw lots of condors and beautifully functional terraces which have been used non-stop since pre-Inca times. 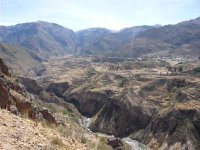 From Arequipa we were supposed to go to Cusco to do the Inca Trail, and then see the crowning glory of Macchu Picchu. However we had to change our plans, and that´s the last I shall say (see Angi´s rant for more details). Sorry Sunil, Adriana & family, we really tried!

So we went east, and higher still, towards Bolivia. We stopped at the Peruvian side of Lake Titicaca for a couple of days, picking up a bit of culture. This place is seriously high - like 3800m, with blazing sun during the day going to well below freezing at night. The quality of light up here is just unbelievable - I have uploaded approximately a grillion photos of the sky, the light and the lake 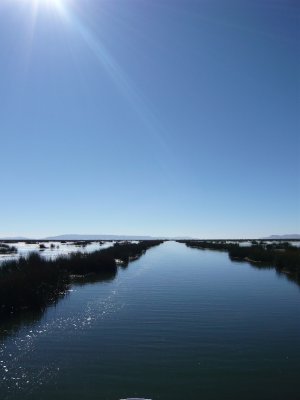 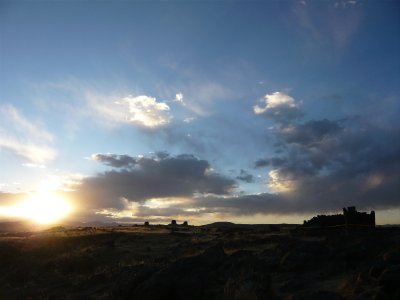 We saw some fantastic costumes and masks in Puno, and some traditional music makers too. Really reminds me of Tibet for some reason, not sure if this is a valid comparison or not, hopefully we get to find out. 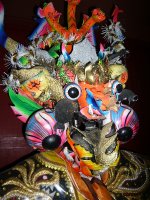 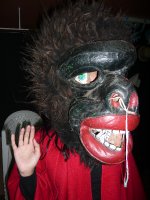 On the Peruvian side we also visited the islands of the Uros people, who build floating islands out of reeds on the lake. No, really! They originally ran away to the lake to escape persecution by the Aymaras but are now a bit dependant on tourist handouts which is a bit sad to see. 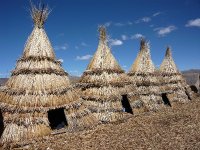 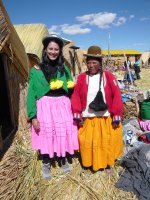 From here we crossed over into Bolivia. The difference between the Peruvians and Bolivianos at this altitude ísn´t that great - and is much less than the difference between lowlanders and the altiplano folk. The people up here have a very hard life, most of them living as subsistence farmers and handicraft makers for tourists. Spanish is by far the secondary language, the northern/Peruvian side speaking Quechua and the southern/eastern/Boliviano side speaking Aymara. These are both tongues which predate the Incas, and are still in common parlance! Amazing...

Posted by pendleton 14:49 Archived in Peru