From The Trees To The Cayes

From Tikal we travelled east to Belize (note: we were upset to find that we couldn't eat armadillo in the national park, only in Flores the closest town, which we didn't go to. Definitely one to come back to later...smooth on the inside, crunchy on the outside!), got mildly conned by a taxi driver but then had such a lovely, warm welcome from the guys on the water taxi to take us offshore that we (almost) forgot about it. This was after the immigration guys told us to "have a monster one". By teatime we were on Caye pronounced “key”) Caulker, going slow. 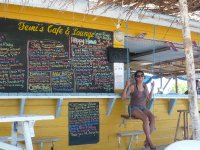 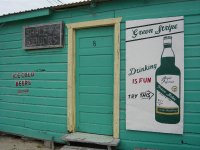 Caye Caulker is the most relaxed place we've been to so far, verging on horizontal. The entire caye has sandy roads, no cars (everyone gets around on golf carts) and lots of coconut trees. The locals are quite a mixed bunch of light-skinned dark people and dark-skinned light people, speaking a sort of English patois that we can generally extract less than half the meaning from (this despite the advantage we thought we had of attending Notting Hill every year without fail). The biggest problem with the island is that it's verging on overrun with very young American gap-year backpackers of the most insufferable kind. Arggh! We've mostly been ignoring them and spending loooong days on boats checking out the great diving they have here. 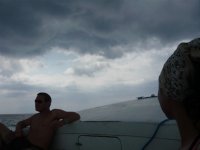 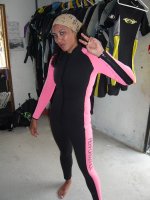 Belize is amazingly rich (for such a small country) in coral habitats – it has the second largest barrier reef in the world stretching for most of the country just offshore; and on top of that three of the four atolls in the Caribbean – Turneffe Atoll, Lighthouse Atoll and Glover's Reef. We visited Turneffe on two days and Lighthouse once, having a great time diving with Belize Diving Services. They even gave us staff t-shirts... it doesn't get any better than that (thanks Brian). 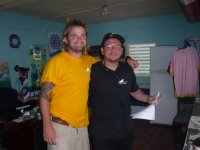 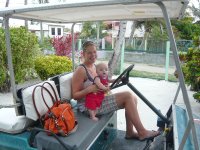 We weren't that blown away by the marine life near to Caye Caulker but as we got further away from the populated parts it got noticeably better - Turneffe South was a great dive. Then on the penultimate day we went for the marquee dive, the Great Blue Hole. A natural formation which is probably prettier from the air than in the water (go here http://nature.wallpaperme.com/4443-1/Blue+Hole_+Lighthouse+Reef_+Belize.jpg to see a picture which i didn't take) - it's a large underwater cave where the roof has collapsed inwards. The interesting thing about it is that there are stalactites and stalagmites present from around 30m under; but limestone can't form underwater so it indicates that the cave was dry at some point. You basically go straight down to 140ft (ish), right at the limits of recreational diving, swim around the stalactites, then start heading back up quite soon with some reef sharks eyeing you. Not bad but the visibility was a bit sucky and several of the group we were diving with were not competent diving to that depth which always makes it a bit stressful. However the last two dives of the day, on Lighthouse Atoll, were awesome & well worth the washing-machine conditions we had to endure on the boat ride to get there! 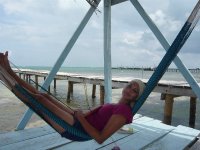 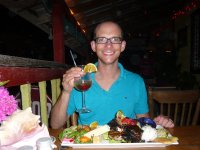 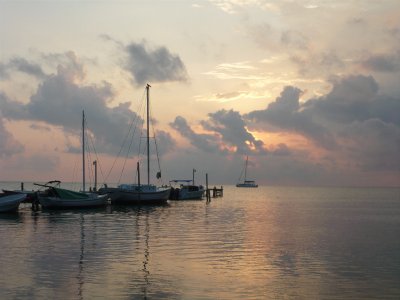 Posted by pendleton 12:26 Archived in Belize