From Antigua we made our way to Tikal, which is one of the major Maya archaelogical sites, within a national park deep in the steaming jungles of northern Guatemala. The Maya weren't one unified country, instead each of the major cities was it's own state (kind of like the ancient Greeks), of which Tikal was one of the biggest. They had quite an obsession with astromony and the passing of various interweaving cycles; towards the end of some of the larger cycles they all got a bit freaked out and would spend their time waging war on the nearest enemy city in order to capture their leader(s) and torture them to death as a sacrifice. Nice guys.

We got to the park in the late afternoon so we had a nice couple of hours wandering around before the rangers closed the park down. And it was amazing. Huge, towering edifices of stone with vertiginous steps (some of which have been closed to the public as people kept on falling to their deaths) suddenly appear out of these clearings which have been hacked into the thick jungle. In between the clearings you're walking down rough paths actually under the jungle canopy, with critters howling at you and strange rustlings in the litter to the side. You really get a feel for how terrifying it must have been for the first explorers, and how incredible to discover (or rediscover rather) the buildings – and I say buildings because while some of them are partially ruined, some of them are still in remarkably fine shape, and you can climb up the steps until you actually get above the canopy. 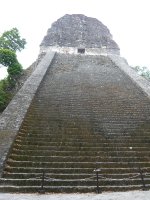 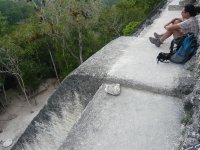 All of this and, during the couple of hours we were there in the afternoon we only saw a couple of other people! We returned in the morning (unfortunately not managing to sneak in early past the shotugn-toting guards to see the sunset) to check out the last couple of places we didn't get to see the previous night but by 8'o'clock the tour bus groups were arriving so the magic was starting to fade just a touch...

An amazing experience though – up there with the Great Pyramids, and definitely a massive tick off the list!

(note - you'll notice there aren't any photos on this post yet. I'm putting this up from Roatan in Honduras [yes, it's two weeks late i know] and it seems that good internet connections are something that don't happen here. Will put photos up as soon as i can and relink them to this post. Adios!)

Posted by pendleton 10:14 Archived in Guatemala