Rolling with our homies in the ATL

We arrive in the bosom of the Bholes late on Friday night, drop off our stuff at Ashleigh's and head to a local bar in Decatur where she's hosting a charity 'beer-pong' tournament (which we are too late to join), and we enjoy some 'March Madness' college basketball. A couple of beers after a long and tiring road-trip journey makes the world a much more just place, even making the basketball tournament bearable. Go Wisconsin! 'March Madness' is a huge thing in the US – you bet money on which of 64 teams are going to win their heats and rounds, and eventually win the whole tournament in early April. Even President Obama bets on this when he's not worrying about 'the economy' – when he released his picks a few weeks ago it caused a furore.

In the ATL we have a succession of lunches, dinners and and lazy days, spending some lovely time catching up with all the (ear-piercingly loud) Bhole clan. Many thanks to everyone for looking after us so well – especially Ashleigh, Sunil, Adriana, Raj, Rama and Suneeta kaku for hosting us and to Sonya and Sarina for running around after us making us feel as welcome as ever. Unsurprisingly, Aaron has grown more than ever and now towers over both of us, and the little kids are growing up fast too. 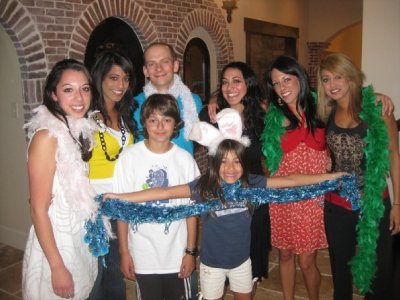 Posted by pendleton 16:32 Archived in USA