I Left My Heart In San Francisco

We got up bright and early for a bit of pavement pounding thru the city of Saint Francis. First up we took a wander through Chinatown, which was amazingly like all the expectations we had of it - lots of bright colours, shops selling either a) tat b) medicine or c) weird raw meat, narrow alleys et al. We visited the Tien Hau (Chinese Goddess of Heaven and Sea) temple, then went to the American Chinese museum (fascinating history of immigration and institutionalised racism), and also a fortune cookie factory

Then we had dim sum and wandered through North Beach to the Fisherman's Wharf area. Some oysters for supper then a stagger home (we'd been walking for about 7 hours by now).

The next morning we headed off for the Mission, which is the trendy sort-of-like-Shoreditch area. We had to make a pilgrimage to denim mecca Self Edge to satisfy my inner jeans geek, and then we headed off to the Castro. This is the main gay area of SF, and it's pretty astounding how... big, and established it is. Gay bars, gay bakers, gay shops, gay hairdressers. Lots of gaiety. Then we met up with Kiya (head jean geek and man behind Self Edge) and Alan (who writes for the Onion) who very kindly took us out to a biker bar named Benders (good beer, loud thrash metal music) and then out for some grub. Ended up pretty hammered and got back kinda late - quite a nice break from driving I have to say! 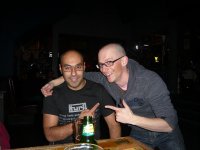 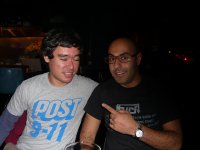 1. It's very clean. We think the sea breeze must drag away most of the pollution and the homeless people seem to pick up all the recyclable trash.
2. It's just the right size. You can walk pretty much anywhere in the city centre (although you might get sandbagged by an unexpected 30-degree hill), and you can drive for an hour out the city and be in beautiful verdant countryside.
3. There is a LOTTTTT to do - pretty much anything you want to. All the usual stuff, plus also you can be whatever sort of freak you want to. We tried to get into a medical marijuana shop but they wouldn't let us in as we didn't have a doctor's note.
4. Angi desperately wants to live here.

Next: The French Laundry & Sonoma...

Posted by pendleton 21:16 Archived in USA