Or when the Saints go marching in

A busy week (and we haven't even managed to see Watchmen!)

We left the condo Monday morning and spent the day in the Salt Lake environs getting some more colour on two very odd, insular and quixotic worlds; the Winter Olympics and the Church of Jesus Christ of Latter-Day Saints.

The Winter Olympics were held near SLC in 2002; Park City is the Olympic park which was built nearby to accommodate all the non-ski slope events (e.g. the bobsled/luge/skeleton run and the big ski jump) which is now open for public tours. Interesting fact: they use 11-year old kids to check if the big ski jump (yes, the REALLY big one, 120m long) is too windy or icy for the athletes to use. What happens if it's too icy for the 11-year olds to land safely? "Well, we have a lot more 11-year old kids than we do athletes", said our unsmiling tour guide. 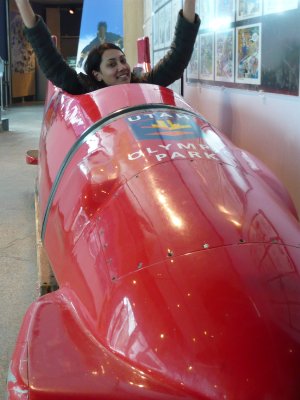 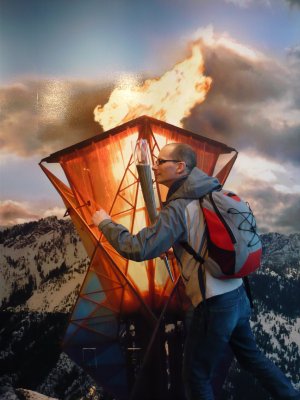 Then later on in the day, some culture - a visit to the main Mormon temple and other buildings. Very interesting from a historical/sociological standpoint (and the building is beautifully preserved - being used to grimy London buildings we simply couldn't believe that it was as old as UCL, as it looked like new). We were shown around by a few 'Sisters' who were completing 18 month missionary placements anywhere around the world (a bit like us?!), one of whom being a Welsh girl who grew up in a pub! Not sure if the guided tours we had were supposed to convert us or not...but sorry guys, not accepting the science behind the theory of evolution makes it difficult for a biologist and a mathematician to take you seriously. Each to their own though, as long as it's not harming anyone. 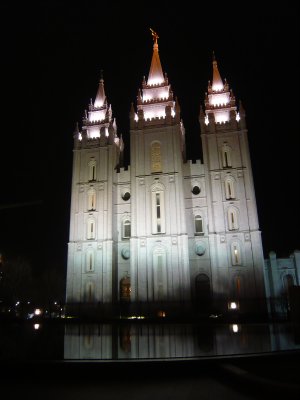 A couple of hours hanging around SLC later and we got on the Amtrak train for our 18 hour journey to San Francisco. It was about midnight at this point so we pretty much got on and fell asleep (*eventually). We woke up to the flat red-brown plains of northern Nevada. Just a bare expanse of absolutely nothing, almost hypnotic in its homogeneity. Every 3 hours or so we'd pass a settlement: small tumbleweed towns with proper old-style Wild West saloons and churches. A nap later and we were speeding through the tops of the Sierra Nevada mountains, which was getting dumped on by 6 feet of snow! (Where is a snowboard when you need it??). Luckily we got through just in time as soon after we left there was an avalanche that buried the track. Lastly we descended through the coniferous forests of the west side and into the rich plains of California. Very green, verdant countryside - kind of like England or Scotland in places but subtly alien with palm trees, cactuses and American signage.

Finally we got off the connecting bus service into SF at teatime that day. We checked into the hotel (bit of a dive but great location) and gave ourselves a real treat - we went for a CURRY! Happy days...

Posted by pendleton 19:02 Archived in USA