Well, the weather outside is frightful

But the hot tub is real delightful

OK, so when there's a severe weather warning here we have to learn to respect it. 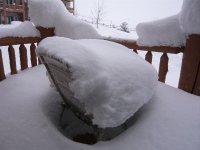 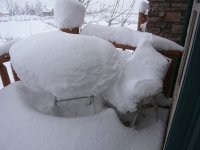 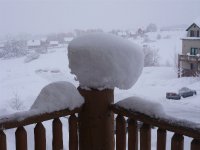 I braved the conditions as I wanted to test the new board. The road to the mountain had been closed earlier due to an accident, and going up really put the 4wd to the limit. Any worse and we'd have needed snow chains as well. Once I got up to the top it was insane. Blizzards closing in on the car bringing visibility down to absolute zero (I had to stop the car a couple times because I just couldn't see anything). No other riders that I could see, just a few crazy ski folk on the slopes. Half speed lifts. Almost two foot of powder on the pistes; something more like three feet at the side. It took me about ten minutes to walk/crawl 100 yards!

The board seems cool but it was more like surfing than anything else. Three runs later I was completely destroyed and scurried home with my tail soundly between my legs. Phew!

This is me calving icebergs off the truck (with my new ride!)

Posted by pendleton 14:21 Archived in USA