Our last task in Borneo was to climb Gunung Kinabalu, the highest mountain between the Himalayas and New Guinea. Kinabalu is basically a huge sharp isolated chunk of black granite sticking up near the coast of Borneo. It's location (only 6 degrees from the equator) gives it a fairly agreeable climate year-round: crucially, despite it being a shade over 4km tall there is zero chance of any snow. Suits us down to the ground as all our cold-weather clothes got sent home months ago.

The walk up is split into several parts; you can generally tell by the pictures how we're feeling at that point. 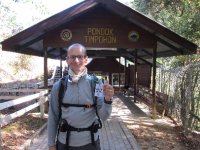 We started bright and early one morning at the entrance to the national park at somewhere near the 1800m mark. It was a perfect day for it, sunny but not too hot (as we had everything we needed for the next 3 days on our backs we definitely didn't want a scorcher). 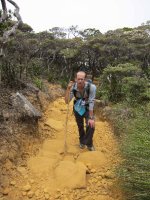 We made it up to the 3200m base camp mark in about 5 hours which was pretty much bang on what we expected. We had a few trials along the way over some of the steep bits but arrived basically in one piece - good news as I had been feeling a bit under the weather directly before we came here. 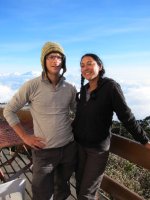 Happily, we arrived above the clouds to a stunning panoramic sunset. Early night as very early to rise. 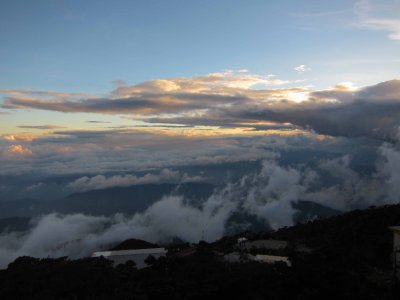 Up at 2:30 for a scanty breakfast and to start the final approach at 3am. We made it to the top just after 6am - 5 minutes before sunrise, knackered but very happy. 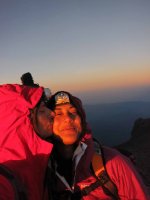 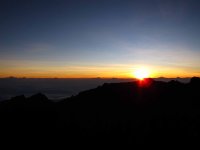 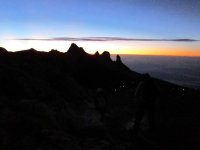 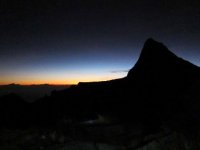 From the top we retraced our steps for about an hour, drinking in the views until the real fun began. 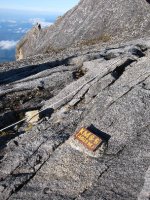 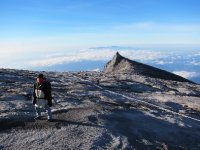 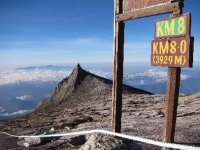 Obviously the 12+ hours of walking up and down the mountain wasn't quite enough for us, as well as being a little on the tame side. Just to juice the experience up a little we signed up for the World's Highest Via Ferrata. To the uninformed, a via ferrata is basically a series of iron rungs, small pegs and ropes strung along the side of a mountain to enable non-extreme sports climbing types (like us) to appreciate the unwalkable sides of mountains... and get absolutely scared out of their wits. 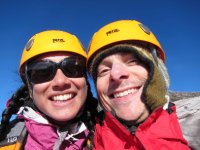 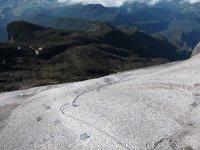 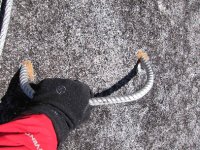 This is us after getting safety-equipment kitted up, but before we saw the sheer drop awaiting us. 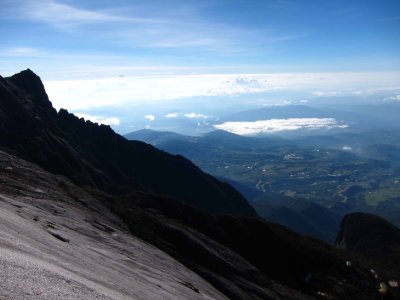 We walked another 10 metres and the cliff face dropped away like a sheer wall. I had somehow ended up in the role of lead climber so had to be first man over, which was absolutely terrifying. Over the next few hours the emotions we were feeling faded somewhat from abject terror, to fear, to concern, to vague enjoyment, to exhilaration! By the end we were both loving it (hero shots enclosed). 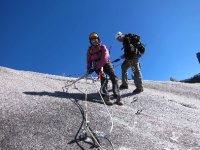 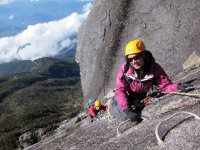 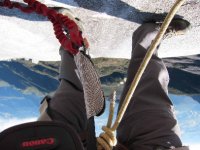 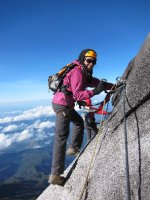 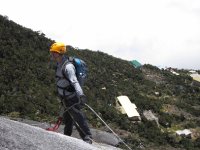 The via ferrata took us a couple of hours to get down, putting us back in Laban Rata for a late lunch, an afternoon of leg resting and (for me) devouring an entire Terry Pratchett book. 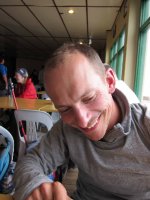 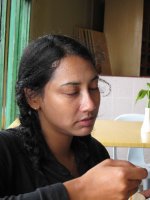 The next day we retraced our steps down the mountain to the national park gate, which was a little hard on the knees but we made it down in about 4 hours. Overall time (up and down) for Team Pendleton was about 17 hours. This doesn't compare that well to the world champion holder who made it up AND down in less than 3 hours. Maybe next time... 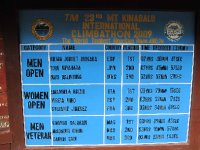 Posted by pendleton 23:01 Archived in Malaysia