Back, After the Break

So, I'm going to jump forward to where we are right now. I will try and blog about the past four weeks at some point - covering Burma, Vietnam, Malaysia and Singapore! - but for now, I'm a little fed up of feeling a huge amount of work hanging over me and would rather post something positive about the here and now.

Here and now is Borneo. To be precise we are staying on an island named Mabul on the east coast of Malaysian Borneo, 2 hrs by boat from the Philippines and maybe 2 hours by car from the Indonesian part of Borneo. We are here as this part of the world has several islands which individually would be known as great sites for scuba diving but being as close together as they are are nothing short of world-famous.

Yesterday we dove an island called Sibuan which was a nice warmup with our new gear (and new underwater camera), showing us loads of interesting small critters, fish and crustaceans; but today was the main event, diving on Sipadan. Sipadan is very special as it's the only oceanic island in Malaysia. What this means is that the island has been formed by an isolated volcanic peak; it's not an upthrust part of a shallow ocean floor, instead on one side of the island the drop off is about 600m straight down, and on the other it's measured in kilometres. This is A Very Good Thing as it means lots of interesting currents, lots of nutrients in the water and (hence) lots of fish.

Happily, we have just got an underwater camera (thanks Sharad!) so we can FINALLY share some of the stuff we see down there with you...

Starting from the familiar to the more exciting, we have a huge school of jacks and a nice cloud of batfish 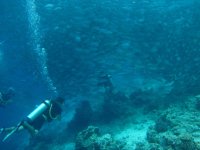 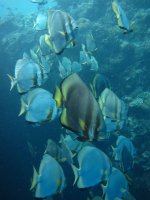 then some more well-camouflaged fish; crocodile fish and peacock flounder 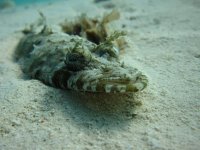 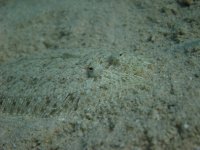 some sea slugs, also known as nudibranchs - favourites amongst divers for their gorgeous colours 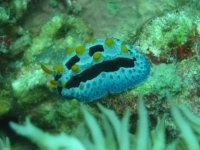 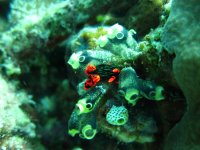 and finally, TURTLES! The general rule of thumb with diving is 'it's never a bad dive if you see a turtle'. We saw more than 40 of these gentle giants today. Incredible. Such lovely creatures... 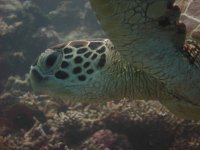 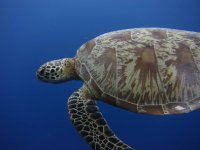 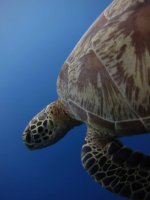 Posted by pendleton 04:59 Archived in Malaysia

Not only it your new camera great but so is the photographer! Terrific snaps!